This blog is about gardening on a foreclosed property. Posts are mainly about the gardens progress with the occasional post about foreclosures.
To get up to speed on the project go to the first few posts which tell the story of the property and how the garden came into being.

The Foreclosure Garden. Before. 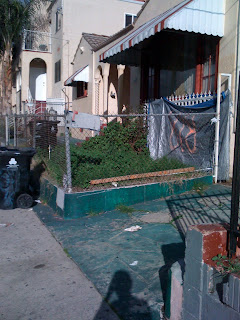 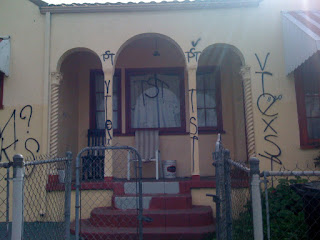 April 18, 2010
I have walked by this house every day for 3 years. 818 Coronado Street has been in foreclosure since 2007. That's the year Bill and I first moved to the neighborhood. A classic example of the housing bubble, it sold in 2004 for $570,ooo. It was then sold again ONE YEAR LATER for $810,000. Neighbors don't recall any "improvements" made to the property during this time. The person who bought the property basically bought it for virtually no money down, having taken out two loans, one for 648,0000 and another for 81,000. (648 + 81= 729. 810-729=81) People frequently used these sorts of equations in the no money down sub prime loan business. Basically, on paper you have an initial loan of 648 which means you owe 162, so you get a second loan of half of that,or 81 which equals 729. You now owe 81. You use the second loan of 81 to pay off the remaining balance. Yup.
So the person who sold the overvalued property in 2004 and probably didn't' actually ever put any money down or put any money into the property walked away with $240,000.
The next owner kicked out all the tenants so she could "flip" the triplex for an additional $200,000. When we were trying to by our house down the block at 812 there were fliers listing the house at a million +. But $810 got left holding the bag. The house got no buyers so she bailed.
I know all this because a friend in real estate gave me the property details when the gang moved in and I was trying to contact the "owners"
In 2008 a tenant appeared. A clean cut well mannered and friendly Asian kid named Tim. Tim had two dogs and wore khaki shorts and polo shorts and was completely unassuming, at least at first. Neighbors thought it a bit odd he had old sheets tacked up in the front windows. Hadn't he arrived in a moving van? His dogs got out a few times and I helped catch them and return them.
Perfectly normal thing to happen. Nothing really odd.
Then I started seeing him with the local gang bangers. That seemed odd. Then it began.
the gang began to occupy the house. Big guys dressed identically stood hanging out at the house. Every weekend the house opened up to giant parties with bonfires on the street. They burned everything. Music shook the windows of houses down the blocks. 50 to 100 big guys, and some girls stood around "partying" Rival gangs drove by and shot at them. They shot back. The helicopters began swarming every weekend. they arrived long before the cruisers. The block was frequently shut down to traffic. the police would arrive and zip tie the "partiers" hands behind their backs and line them up starting in front of our house and continuing down the block.
The police finally got a gang injunction against the local gang, which made it illegal for more than three known members to congregate at any one place in public. For a while the parties continued. The gang erected a giant tarp and surrounded the house and yard with it. But the busts continued on a weekly basis. One day Tim disappeared as did the dogs. The house stood empty, graffitied, with trash piled in the front"lawn" The parties stopped.
After a few months a terrible odor started emitting from the house. The health inspectors were called. Weeks later a crew in a pickup truck arrived to "clean" the house out. They had no water so I gave them bucket fulls. I asked them what it was like. One guy said "I'll put it to you this way" there were people living in their but their ain't no plumbing. Whooo it is nasty!" and some dead animals, maybe a cat or something..."
Months later another crew arrived and painted over the mounting graffiti.
Then a construction crew spent a week or two cleaning and fixing and painting.
Then nothing. No "no trespassing" signs. No locks on the gates.
The place sat. Weeds grew prodigiously. A relative calm ensued.
Posted by AE at 2:01 PM